After a 25 year career as a military pilot, there was nothing that intimidated Dorothy.

From flying Black Hawk helicopters to jumbo jets, she was a high achiever in an arena with zero excuse tolerance. Her second career culminated as captain of a major commercial airline and she had built an impressive track record with a “can do” attitude.

The series of health deteriorating events brought about the worst imaginable consequence for the lifetime career pilot. She lost her flight medical clearance. A bad bout of lung issues from contaminated air and subsequent medical treatments caused steroid-induced weight gain, shortness of breath, sleep apnea, and a host of other ailments. An air turbulence event caused a back condition resulting in artificial disc surgery and extremely painful bouts associated with activity.

After a 25 year career as a military pilot flying Black Hawk helicopters to a second career as captain of a major commercial airline flying jumbo jets, she had built an impressive track record with a “can do” attitude. Hazardous health habits are practically inevitable with nocturnal shifts in the cockpit on international flights. Stress from sleep deficit has been known to raise cortisol levels which exacerbate unwanted weight gain. A bad bout of lung issues from contaminated air and subsequent medical treatments caused steroid-induced weight gain, shortness of breath, sleep apnea, high blood pressure and a host of other ailments. An air turbulence event caused a back condition resulting in artificial disc surgery and extremely painful bouts associated with activity. At age 55, being a high achiever had taken its toll on Dorothy’s health. Every pilot’s greatest fear became a reality. She was an overweight pilot grounded.

Depression had set in and a sedentary lifestyle replaced a previously high functioning career. Her retirement dreams began to look like a sad case of disability. The situation seemed out of control with no recourse. If only she could find a way to work around what she could not do and seek another solution. She had tried so many calorie cutting weight loss methods only to regain the weight back and then some. Was there something out there that she had not tried? Could she somehow find a way to turn her health around and reclaim her career?

By the time Dorothy was on disability for 4 years, she had tried everything she could to turn things around. However, she became so physically diminished and her spirits had plummeted so low that just getting dressed and leaving the house became an insurmountable challenge. She knew this was not like herself.

To top it off, the recession wiped out her investments and life savings. At age 55, she only knew one way to survive and that was to get back to work. All she needed to do was lose weight, get healthy and get back to flying jumbo jets again. Flying was the easy part.

Losing 100 pounds was going to be a challenge and she didn’t even know where to begin even if she could find the energy to try. Living in Anchorage, Alaska makes a person a hearty survivor– not to mention a successful military career and high ranking commercial pilot. Dorothy knew she had what it takes she just didn’t know where to find herself amidst all that had taken a toll on her.

The amazing fortitude of a strong-willed spirit propelled Dorothy through 4 weeks at the womens weight loss retreat. Sure, there were things she could not attempt to do. There were exercises she was simply not qualified to even try. Proper progression starting out with reasonable movements allowed her to work around what gave her trouble. She learned to focus on embracing those activities that she could do.  Dorothy emerged with renewed spirits, pounds down and new habits to go home and finish shedding the rest of her weight. Returning to the career she dearly loved seemed like a viable possibility after all.

In 4 weeks at Debra Stefan womens weight loss retreat residence, Dorothy emerged with renewed spirits, pounds down and new habits to go home and finish shedding the rest of her weight. She knew she had found what it takes again and her eyes are steadfast on the goal. She now sees herself back in the cockpit! What happens between the ears can make dreams come true. See her video story of womens weight loss retreat and hear her own account.

“You helped me start my health journey and because of you, I’m a new person for it now!”
Dorothy 5 years later 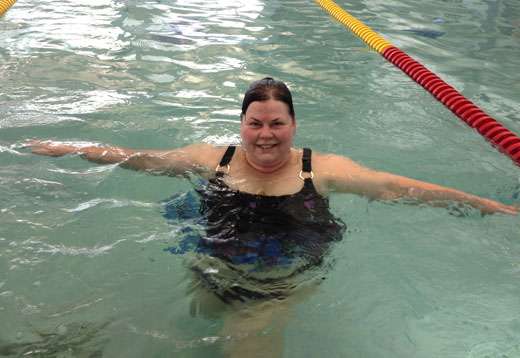